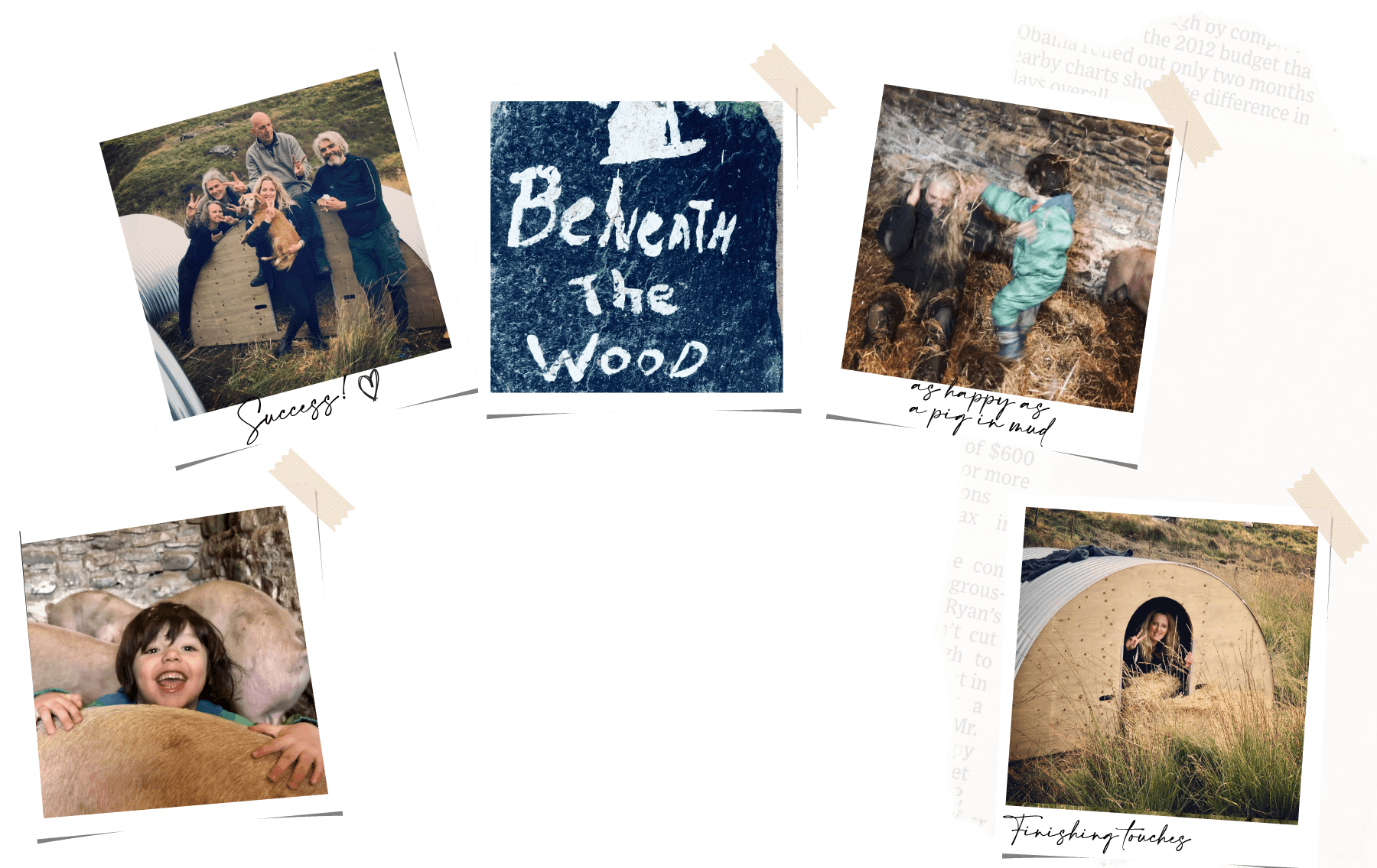 BENEATH THE WOOD ANIMAL SANCTUARY IS A BEAUTIFUL HOME FOR LIFE FOR OVER 150 RESCUED ANIMALS WITH A BIG STORY AND AN EVEN BIGGER PLACE IN OUR HEARTS.

HOME TO A FAMILY OF CHARACTERFUL ANIMALS INCLUDING UNREHOMABLE DOGS WITH SERIOUS BEHAVIOURAL ISSUES, A MUTE SHEEP AND HER FLOCK, CATS ON THEIR 10TH LIFE, A COUPLE HORSES AND MOST FAMOUSLY THE #53PIGS.

We were introduced to the sanctuary by our dear friend and vegan activist John Awen who told us of the chilling story of the Pembrokeshire 53, who after being saved from horrific living conditions of Bramble Hall Farm which was operating an illegal slaughterhouse, had a destruction order placed on their heads as the conditions and care were so poor that they survived by eating the carcasses of other dead animals and as such where at risk of carrying diseases such as Mad Cows disease.

Although at the time not public knowledge, through conversations with  Sasha of Beneath The Wood Sanctuary we followed the story closely. It was a truly drawn out process and ironically although they were saved they lived in isolation for 9 months with a “death sentence” meaning they could be destroyed at any moment. Eventually, saved the uncertainty of the whole event meant that when given the green light it was a mad rush to get everything in place for their arrival.

Along with our friends at Friendly food, We rolled our sleeves up and got dirty on welsh hillside in typical localised weather and helped erect 10 pig arches. It was a rush to get all erected but we managed it. Shortly after all pigs we saved and now have a home for life at Beneath The Wood.

SINCE THE OFFSET OF OUR INVOLVEMENT, VIVA LA VEGAN HAS BEEN COMMITTED TO SUPPORTING AND CHAMPIONING BENEATH THE WOOD ANIMAL SANCTUARY BEST WE CAN AND WE WILL CONTINUE TO DO SO, AND OUR THOUGHTS ARE NEVER THAT FAR FROM HELPING WITH THE NEEDS OF THE SANCTUARY.

This is not just for the animals but also in support of Sasha the owner of the sanctuary who is just so committed. From the outside looking in some people may think that the life of a sanctuary owner is a beautiful life style choice and in some ways it is. But it’s a really tough life with early starts to very late finishes and we have been there on some of our visits on a hill beneath a wood in a wintery wales with the cold rain chilling us to the bones and so tired but having to put the animals first before our discomfort.

FOR US THIS WAS JUST A TEMPORARY DISCOMFORT BUT FOR THE OWNERS THIS IS A LIFE TIME COMMITMENT.

The physicality of the life is one thing but also the worries of finding the funds to feed and safely home the animals is another aspect that many who are not involved realise. Bravo Beneath the Wood; Bravo Sasha and John.

We can’t always be there on the hills with the animals and Sasha but our hearts are and we are committed in fund raising for them.

We are always looking for new ways to help raise funds for the pigs, from new designs, scratch card competitions, to earlier this year Viva La Vegan hosted an incredible prize draw with prizes totalling over £1100 which had been donated to cause by some of our favourite vegan brands. As a result we raised a whopping £2500. We were overwhelmed by the support from other businesses in donating prizes and with all those people that persevered with the raffle platform we choose (it wasn’t the easiest to buy from at times).

HELP SUPPORT THE PIGS – A % OF THESE ITEMS GOES DIRECTLY TO THE SANCTUARY.

WE CONTINUE TO SUPPORT THE PIGS DURING THE COVID LOCKDOWN BEST WE CAN,

we are involved with a food waste / food share project which initially started out as an environmental project to save ‘waste’ food going to incineration , but now feeds thousands of people monthly that are experiencing food poverty due to the virus, a silver lining to which is there is a lot of food waste of food not suitable to give out to the local families so each week we careful sort out the food and deliver a van load of assorted fruit , veg and bread to the sanctuary to supplement the pigs feed, giving the pigs more variety and saving the sanctuary a couple of hundred pounds a week towards their massive food bills.

We also expanded our direct family of three humans, one cat, three dogs to now include our BIG ginger baked bean, beautiful VeeVee one of the original 53pigs and spotty Oreo one of the piglets conceived before they arrived at the sanctuary & born into freedom at Beneath The Woods and whom we will directly support for life.

BENEATH THE WOODS SANCTUARY

FOLLOW THEIR PROGRESS, OR SPONSOR AS RESIDENT PLEASE VISIT THEM AT: HTTPS://BENEATHTHEWOODSANCTUARY.CO.UK