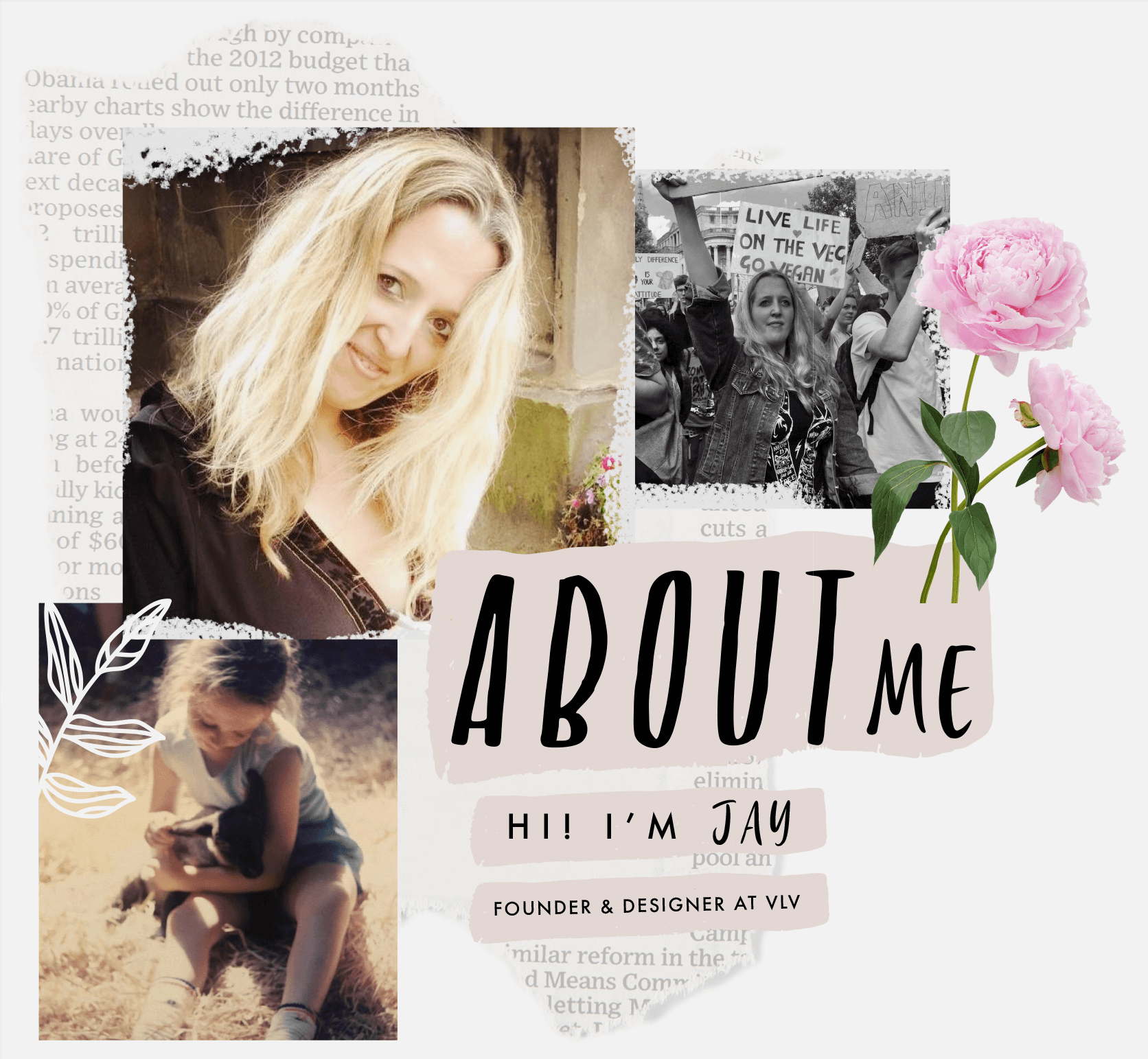 AS A CHILD I LOVED DRAWING. I WAS ALWAYS DOODLING OVER ANY PAPER OR ENVELOPES I FOUND AT HOME (OFTEN TO MY PARENTS DISMAY). I DREAMED FASHION AND KEPT SKETCH PADS UNDER MY PILLOW FOR MY LATE NIGHT CREATIONS.

I’VE BEEN A VEGGIE SINCE I WAS 7, BACK WHEN THE OPTIONS IN THE SHOPS WERE SUPER LIMITED AND VEGANISM WASN’T MAINSTREAM. SO I BECAME AWARE OF OUR ROLE IN PROTECTING ANIMALS AND THE ENVIRONMENT DECADES BEFORE IT WAS TRENDY.

My activism started early too. In my early teens my best friend and I saved a wildlife area and pond with great crested newts from a luxury housing development by Lovell. I even ended up giving a speech about the environment to the House of Lords.

I received a BA (Hons) in Fashion Design and Production at Uni, after which I moved to London. I spent 2 years there designing men’s casualwear, official club football stripes and merch, sportswear, and lots of socks & pants!

I progressed, and I was promoted to design room manager and got a taste for travel. I was travelling to Europe for trade shows, to the U.S comp shopping and to India to see the factories where we produced some of our clothes. I loved it & gained lots of valuable experience. 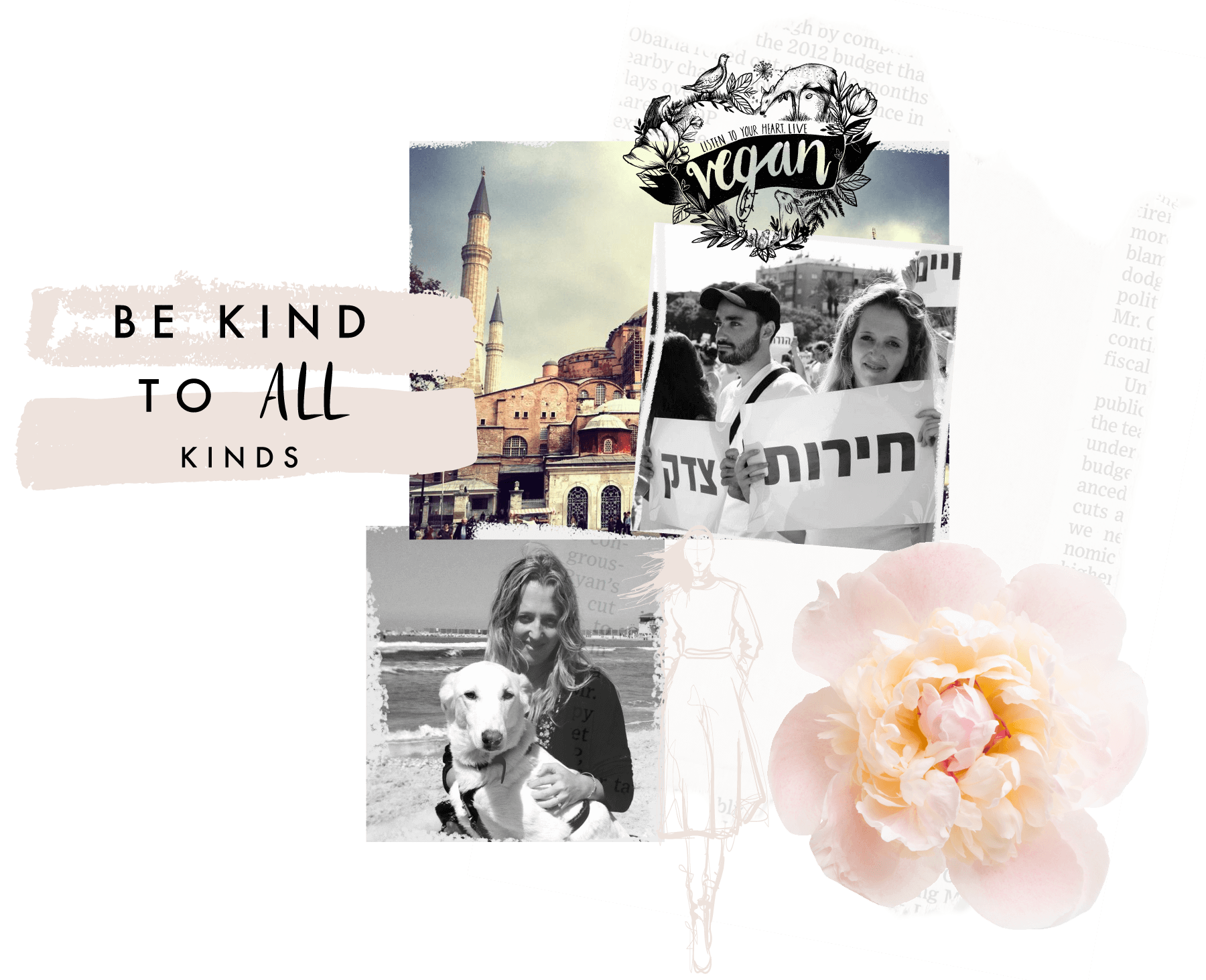 FROM THERE I MOVED TO ISTANBUL, DESIGNING FOR MANY WELL-KNOWN UK HIGH-STREET BRANDS. I LIVED A MOVIE STAR LIFESTYLE, SPENDING WEEKENDS ON YACHTS AND TRAVELLING EVEN MORE. IT WAS CRAZY HOURS, BUT I GAINED INVALUABLE FIRST-HAND EXPERIENCE OF THE FASHION INDUSTRY. THEN, AFTER 8 FABULOUS YEARS, I LEFT. I HAD ANOTHER CALLING…

DEAR ANIMAL
WE ARE SORRY, WE SEE YOU,
WE ARE TRYING

SUNSHINE & GOOD FORTUNE BROUGHT ME TO THE SHORES OF TEL AVIV IN ISRAEL.

Here I was surrounded by passionate, fiery animal rights people. It was here where my 3 adopted dogs and 1 street cat found me. And it was here that Gary Yorofsky’s speech turned me Vegan halfway through his documentary. It’s where my journey began, a journey that ultimately changed the course of my life. The transition from veggie to vegan was quick and easy and it soon became one of my main passions. Over the years that followed I participated in many AR protests and demos.

I returned to the UK to start a family. But not just that I’d also become disheartened by a lot of what I’d seen in the fashion industry, both environmentally and social justice wise.

My travels opened my eyes to the world, but also the negatives of my industry. Everything from people being forced to work with abrasive chemicals in the denim industry with little or no protective gear, to dye running out of factories and polluting community water supplies and many first-hand stories of people forced to work for long hours, in poor conditions.

I no longer wanted to be part of it. So I left that world and worked as an online graphic artist. But I’d always dreamed about fashion, and there’s something beautiful about how tactile clothing is. After 2 years away from it I missed its touch. 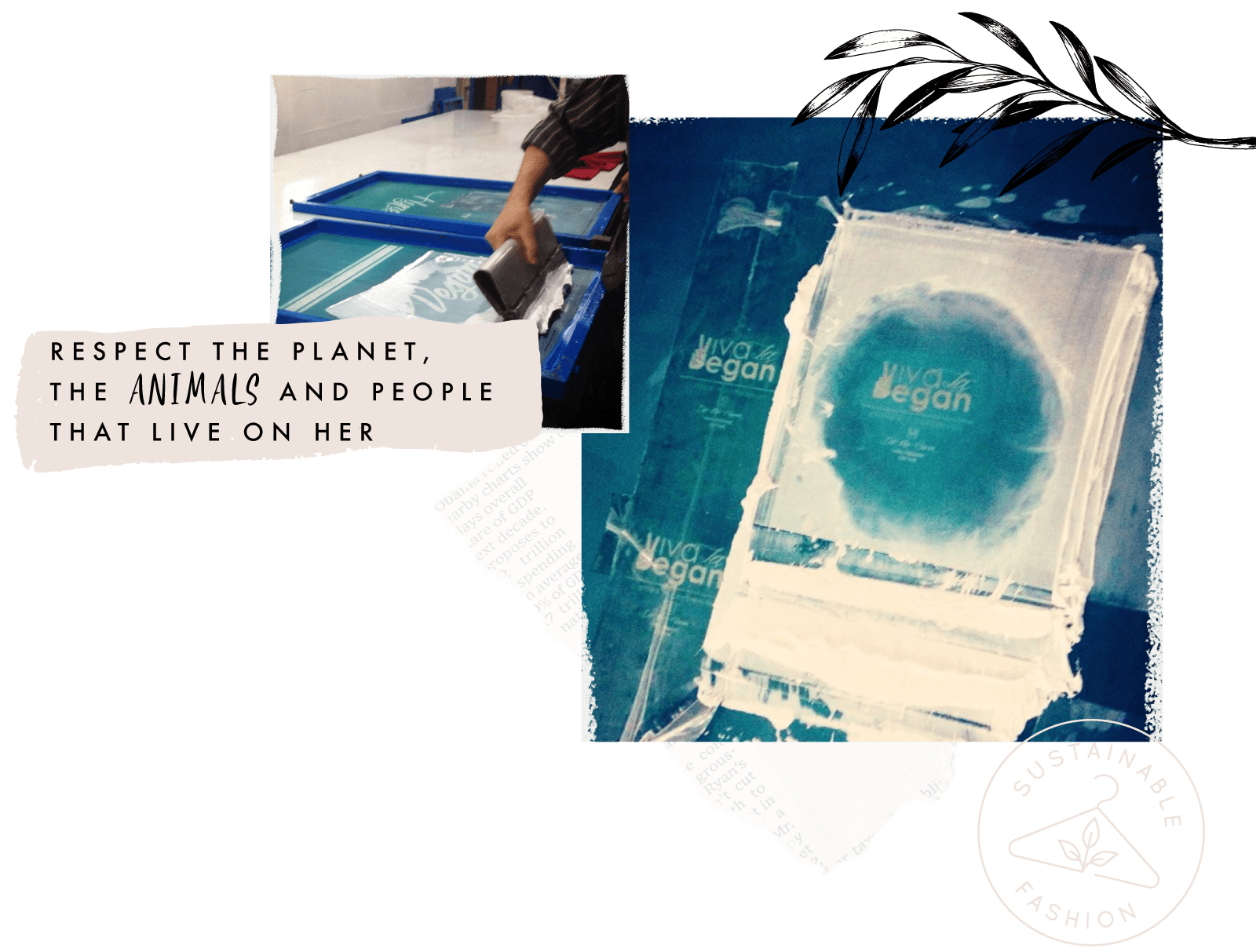 I BELIEVE THAT WE NEED TO BRING ABOUT POSITIVE CHANGE BY OWNING OUR OWN ACTIONS AND WALKING THE TALK. SO I DECIDED TO START MY OWN BRAND THAT WAS IN LINE WITH MY OWN ECO-ETHICAL ETHOS.

ONE VIVID DREAM, AN INSPIRED NIGHT OF FRANTIC SKETCHING AND THE SEEDS OF VIVA LA VEGAN WERE SOWN.

Now, Luke and I run Viva La Vegan as a two person team. We’re proud parents of a vibrant, and very vegan 4 year old, and we spend most weekends either at vegan festivals, climate change or animal rights demos. Life is very different in many ways, but my core values remain the same and the new era of veganism in our family and beyond has begun.

We’re on a mission to make sure that continues.